Asteroid Bennu is a near-Earth object that caught the attention of NASA. Just a bit larger than the Empire State Building, Bennu is a constant source of surprises for the scientists involved in the project. NASA started observing the asteroid in December last year.  The rock baffled the investigators by showing off some odd behavior for an asteroid. It spewed particles in space, a phenomenon that is extremely rare.

The chance that Bennu is an active asteroid determined scientists to further investigate the particle events on it. One can easily understand NASA’s interest in Bennu. The asteroid may reveal secrets dating back to the very beginning of our solar system. For this reason, NASA’s OSIRIS-REx mission is to retrieve samples from Bennu in September 2023, as the sample collection process begins in the summer of 2020.

In the meantime, NASA’s experts released new data regarding Bennu’s particle ejections. While still in the theoretical stage, the information could help scientists understand better how asteroids behave. 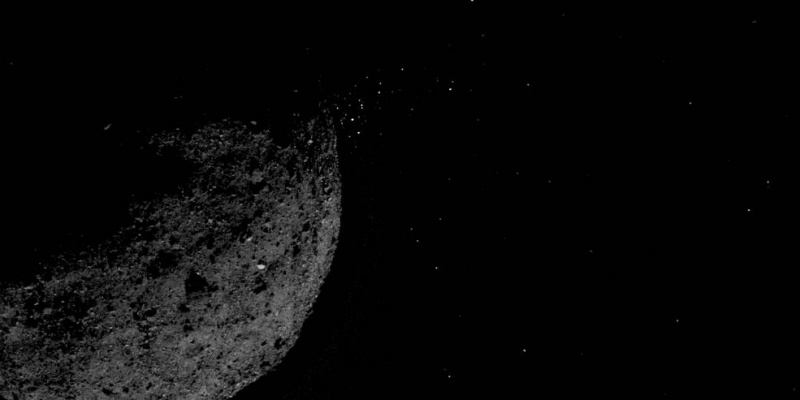 The OSIRIS-REx team registered three major particle ejection events from January to February. They concluded the three emissions took place in different areas on the asteroid’s surface. An odd factor to consider was that all three particle ejection moments occurred in the late afternoon on Bennu.

What Happens with the Ejected Particles?

As per the scientists’ reports, after being ejected from Bennu’s surface, the particles either briefly orbit the asteroid and fall back on its surface, or get lost in the vastness of space. The largest such event took place on January 6. The mission’s team observed that the particles traveled up to 10 feet/second and varied in size. The biggest particle they could observe was up to 4 inches.

What is the Cause of Particle Ejection on Bennu’s Surface?

The next logical step for the team was to investigate the possible reasons and mechanisms behind the particle ejection events, managing to narrow down the theories and potential causes to three. They are:

But as things are not always simple in Earth’s nature, let alone in space and on asteroids, scientists are in a stalemate. The particle ejection events on Bennu could exist as a result of one of the mechanisms or a combination of them.

In the words of Steve Chesley, one of the paper’s authors and Senior Research Scientist at NASA’s Jet Propulsion Laboratory in Pasadena,

“It could be that more than one of these possible mechanisms are at play. For example, thermal fracturing could be chopping the surface material into small pieces, making it far easier for meteoroid impacts to launch pebbles into space.“

What’s Next for Asteroid Science and the OSIRIS-REx Mission?

When they are not researching how to deflect a potential killer asteroid from bringing the apocalypse on Earth, NASA is observing hundreds of thousands of asteroids. Bennu, among them, is a true fountain of scientific wonder.

The OSIRIS-REx’s mission is to retrieve samples from the asteroid. Of course, experts hope that among them, they will also bring back some of the ejected particles that fell back on the surface. While they cannot know for sure, the scientists believe that all materials collected from Bennu will shine new light on asteroid behavior.

Even if the particle ejection phenomenon remains a mystery for now, scientists are confident that they will get to the bottom of this. After all, Bennu offers unprecedented opportunity for further research.