NASA will soon shot an asteroid. ESA will go examine the “corpse.” All in the name of Armageddon prevention. If all goes well, the Didymos asteroid mission will teach us planetary defense as we have never imagined it before. And give us human-made meteor shower, among others.

Do you know those fake news mass hysteria moments when yet another celestial body hits the Earth and we go boom? Well, while it did not happen in our lifetime yet, it might actually happen sometime. This is what NASA and ESA want to prevent with their joint Didymos asteroid mission.

There is no asteroid coming towards us. Therefore, this mission isn’t a salvation one but has a more scientific flair to it. Both agencies want to see if, in the case of such a threat coming from space, humankind could prevent the End of Days. How are they going to learn this? By crashing a spaceship into a binary asteroid. How is that for crazy things about space that nobody tells you about? Humanity hunts for an asteroid to blow it up to learn how it works in real life and not in the movies!

If this isn’t the best time to be alive in the era of space exploration, we don’t know what is!

NASA will start first by testing whether deflection could save the planet from a rogue asteroid coming our way. In order to do so, the agency will send the collider (the Double Asteroid Impact Test or DART). The spacecraft will smash into a double-asteroid system called the Didymos asteroid.

This binary asteroid is somewhere between Earth and Mars. NASA aims to deflect the orbit of the smaller sibling of the two celestial bodies. By small we mean that it is the size of the Giza Great Pyramid. If it impacted the Earth, it would erase a city from existence.

So let’s see what NASA has to say about this and the planetary defense project:

The Didymos primary body is approximately 780 meters across, its secondary body (or “moonlet”) – now called Dimorphos (“having two forms” in Greek) is about 160 meters in size (525 feet). It is more typical of the size of asteroids that could pose the most likely significant threat to Earth.

The American agency hopes to launch the collision spacecraft in the summer of 2021 and crash it into Dimorphos at 14,764MPH. For the first time in history, humankind is ready and capable of trying to shift the orbit of a celestial body to avoid unfathomable destruction.

The force of the impact is expected to change Didymoon’s 11.92-hour orbit by about 4 minutes. It is a big enough change for telescopes on Earth to detect. If it succeeds, the mission might help confirm that humanity’s best defense against a rogue asteroid is to bump it into another orbit away from Earth. 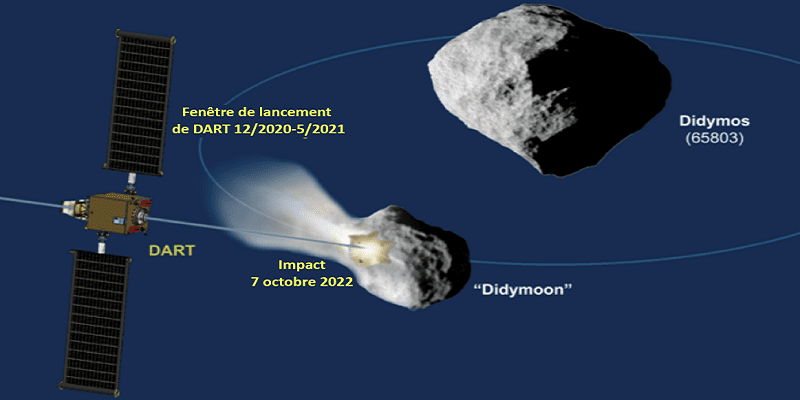 At the moment of impact between NASA’s DART and the smaller Dimorphos asteroid (estimated to take place by the end of 2022), an Italian cubesat (LICIACube) will be there to observe and analyze the event. After that, the ESA will launch a HERA probe (around October 2024) to study the effects of the crash on the target asteroid. ESA hopes to find relevant information on the impact crater, mass, orbital shift, and more.

The ESA and NASA chose this particular couple of asteroids because scientists can realistically record the results. Dimorphos is small enough and orbits slow enough so we could significantly change its orbit. However, we could not do the same for those massive objects flying solo in a solar orbit.

According to Ian Carnelli, managing HERA for the European Space Agency,

It is one more small step towards making our destination seem like a real place, just as astronomers around the globe are observing what is currently just a minuscule dot in the sky to gather all the practical details they can, in support of DART and Hera mission planning. We can’t wait to see what is really looks like from up close and we are excited to plan close proximity investigations for at least six months in 2027.

Our advice is to take those telescopes for beginner or advanced astronomers out and have a blast at gathering information to support the Didymos asteroid DART mission. As we said, if you ever wondered why you needed a telescope and how to put it to work, this is the time to find out!

According to the ESA, the aim of the joint asteroid mission is to

What can go wrong when humanity sends objects into space to deflect asteroids and thus learn how to prevent Armageddon? Well, it will probably not be like in the movies, but will be a bit… ironic.

Earlier in 2020, the Planetary Science Journal published a study On the Delivery of DART-ejected Material from Asteroid (65803) Didymos to Earth. What the scientists are saying is the fact that the impact could produce the first-ever in human history human-made meteor shower. The irony, as science journalists point out, is that in our attempt to deflect a space catastrophe, we will release a cloud of space debris upon ourselves.

However, the irony is not that big when we think that this cloud will help scientists understand better the composition of asteroids and other near-Earth celestial bodies. A small meteor shower on Earth might disrupt the orbiting satellites. The risk is tiny and humanity should not worry about it.

We Won’t Go Quietly Into the Night

…nor will we have to sacrifice Bruce Willis again for the greater good of humankind. Jokes and spoilers aside, the joint ESA and NASA asteroid mission aims to offer us all a better understanding on how we could defend the planet in the case of a real crisis. Deflecting an Armageddon-like asteroid is a serious mission and we hope both agencies will prove successful in their endeavors.

As we all know, NASA and the ESA have a history of preparing together to help humanity go where no one has gone before. And we are referring to finding life on Mars. So we are in good hands. We have to admit, we are pretty curious to see the first human-made meteor shower on Earth, even if we would have to breathe a bit of stardust in the process!

We can’t wait to report back on the Didymos asteroid and the NASA DART mission, keeping a close eye on ESA’s HERA discoveries as well. If you have fresh info on the topic or questions you want clarifications for, don’t hesitate to leave us your thoughts in the comment section!