The Nightingale Is NASA’s Target for the OSIRIS-REx Mission

The Nightingale site is the lucky winner spot where NASA will send the OSIRIS-REx spacecraft to collect samples from asteroid Bennu. The spot promises great scientific advancements, but also some risks.

As we already reported, NASA’s OSIRIS-REx mission is to reach asteroid Bennu’s surface and retrieve a sample back to Earth. Bennu has given NASA a good run for its money with its odd particle-spweing behavior and rugged surface. Nevertheless, the agency announced it finally chose the perfect spot to collect the samples it wants to bring back home.

The Nightingale is near Bennu’s north pole and presents some intriguing features. The site sports fine-grained and dark material, leading scientists to believe that they might find organics and hydrated minerals on the asteroid. The spot is, in fact, a small crater inside a larger crater, where the agency hopes to discover pristine samples. As reported on previous occasions, scientists hope than Bennu will offer answers about our solar system’s early days. 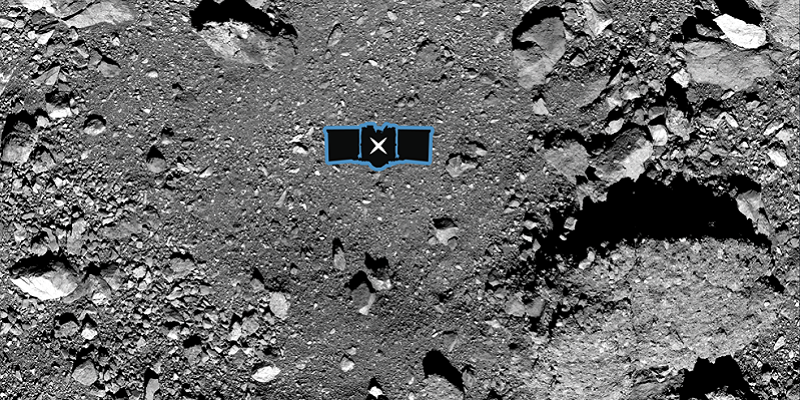 Collecting samples from the Nightingale does not lack risks, however. Scientists believed they had plenty of room to complete their mission, hoping for at least a diameter of 164 feet for their sample site.

However, the safe zone on the Nightingale is just 52 feet, so not much of a wiggle room. Another issue with the sampling site is that is has an impressive bodyguard. A boulder the size of a building is towering over the small crater. It can cause the OSIRIS-REx spacecraft a lot of damage while the ship backs away after collecting the sample.

Nevertheless, the spacecraft is not playing a game of chance with Bennu. It has to collect 2.1 ounces (60 grams) of asteroid material to check the mission as a success. Moreover, it has the tech and the capacity to try three times to get the necessary amount of material before it returns home.

While not lacking risks, NASA scientists show great excitement when it comes to the Nightingale spot and the OSIRIS-REx mission.

In a statement, Dante Lauretta, OSIRIS-REx principal investigator at the University of Arizona in Tucson, said that

“After thoroughly evaluating all four candidate sites, we made our final decision based on which site has the greatest amount of fine-grained material and how easily the spacecraft can access that material while keeping the spacecraft safe. Of the four candidates, site Nightingale best meets these criteria and, ultimately, best ensures mission success.”

What Can We Expect from the Nightingale Site?

NASA planned the first “touch-and-go” sample collection trial on the Nightingale in August 2020. If all goes according to plan, the OSIRIS-REx spacecraft will depart Bennu a year later and come back home in 2023.

The spaceship will hopefully carry old and pristine material from a carbon-rich asteroid that may have played an important role in bringing some life building blocks here on Earth.