ClearSpace: ESA’s Suicidal Robot is Up to Clean A Piece of Space Junk

Swiss startup ClearSpace won a contract with the European Space Agency for a space junk cleaning mission in 2025. The ClearSpace-1 mission involves a four-armed suicidal robot that will clear a midsize piece of space junk called Vespa.

The Garbage in the Sky Needs a ClearSpace Intervention

There is a ton of junk in low Earth orbit (about 1,200 miles in altitude), just as it is on Earth. However, with more than 3,000 dead satellites and tens of millions of debris pieces clattering around the atmosphere, the skies are in danger of becoming even messier.

According to calculations, there are about 120 million tiny objects and a tens of thousands of chunks orbiting the Earth at speeds up to 17,500 miles per hour. Space junk is becoming an increasing concern for astronomer activity, satellite integrity, and space missions’ safety.

The ClearSpace mission wants to demonstrate that humans are able to clean up the orbital mess they’ve made by sending a robot to tackle the problem. ESA’s version of Wall-E is a kamikaze, however, as it will not return with the collected piece of junk, but burn it and itself while entering Earth’s atmosphere. 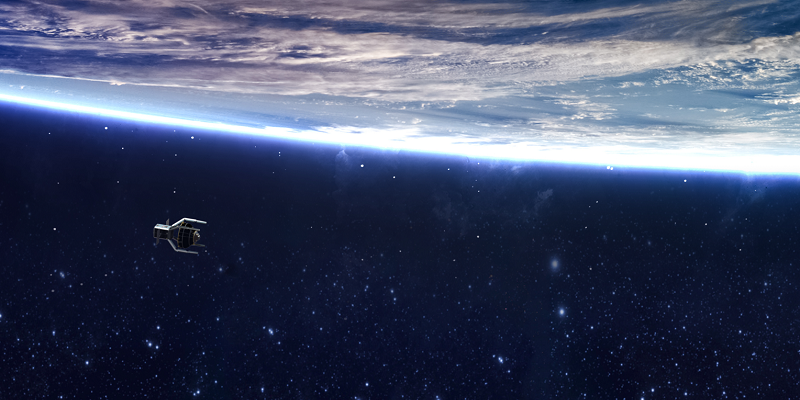 How Does the ClearSpace Robot Work?

During the ClearSpace-1 mission, ESA experts will launch the junk chaser robot 310 miles above Earth for tests. Then, the robot will move forward into the orbit (about 500 miles) to capture Vespa. The Vespa (Vega Secondary Payload Adapter) is the ESA’s Vega launcher, left in space by the European agency back in 2013.

Once it reaches its target, the robot will capture it with its four arms, hug it, and then make a final descent into oblivion (Earth’s atmosphere). A fiery and costly end for a single, small piece of space junk, some would say. Nevertheless, the ClearSpace mission is just at its beginning.

As Luc Piguet, founder and CEO of ClearSpace, said,

“This is the right time for such a mission. The space debris issue is more pressing than ever before. Today we have nearly 2000 live satellites in space and more than 3000 failed ones. And in the coming years the number of satellites will increase by an order of magnitude, with multiple mega-constellations made up of hundreds or even thousands of satellites planned for low Earth orbit to deliver wide-coverage, low-latency telecommunications and monitoring services. The need is clear for a ‘tow truck’ to remove failed satellites from this highly trafficked region.”

What Can We Expect from the ClearSpace Project?

With the cost of this one-time mission estimated at around $133 million, one could argue humankind could spend the money to clean up its polluted waters or reforest its lands. Nevertheless, the problem of space junk is serious and both the ESA and NASA are trying to deal with it.

The ClearSpace mission is to retrieve a mid-sized sturdy 220 lbs. conic chunk of metal. In other words, nobody thinks the four-armed robot will fail to capture it and deorbit together with it. Is this enough to clean orbital garbage? Of course not. This project is comparable to extracting a drop of water from a lake.

However, what ClearSpace and the ESA hope is to find more cost-efficient solutions that can sustainably clean up the space junk more objects at a time. This is clearly not the first attempt or project to clean up our orbit. From tiny nets to mounting lasers on satellites to space harpoons, countries and space agencies are trying their best.

We shall see what happens in 2025, when the ClearSpace mission is due for launch.