Ancient penguin fossils found near New Zealand’s South Island show that penguins had a blast after the dinosaurs’ extinction. The findings are part of the missing link in penguin evolution and may be the key to all penguins’ origin.

The tuxedo-wearing cute birds we know today as penguins have a convoluted history, new findings show. During excavations on the Chatham Islands near New Zealand’s South Island between 2006 and 2011, scientists found five ancient penguin partial skeletons. Now, the research community agrees that the fossils belong to a new species of penguin. The Kupoupou stilwelli lived around 60 to 62.5 million years ago, after the dinosaur extinction (66 million years ago).

Back then, oceans were tropical and subtropical, and there was no polar ice cap on the South Pole. The ancient penguins in question did not differ much in size in comparison to their modern relatives. In addition, just like their contemporary peers, the ancient penguins performed best underwater. These fossils also show that Kupopou stilwelli remains the first penguin found to date that is similar in foot shape and hind limb to modern penguins. 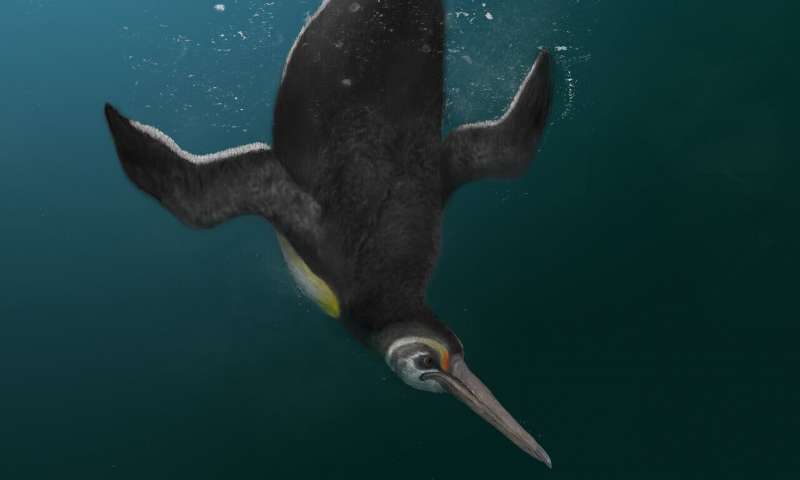 The Missing Link in Penguin Evolution

A tad larger than the Emperor or the King penguins of today, the ancient penguin Kupoupou was an amazing diver. In fact, its name comes from the Te Re Moriori indigenous language of the island. It means “diving bird.” The “stilwelli” part of the name is a derivation from Jeffrey Stilwell. He was the paleontologist leading the excavations more than a decade ago.

Scientists consider the Kupoupou one of the most important paleontology discoveries of late. The ancient penguin could be the missing link between extinct giant penguins and the penguins we love today.

While unclear whether Kupoupou was the terror bird of the Southern Seas, it was nonetheless among the privileged species of its time. As missing links go, scientists are still not sure where and how this ancient penguin fits the bigger picture of evolution.

According to University of Canterbury adjunct Professor Scofield, one of the paper’s authors,

“We think it’s likely that the ancestors of penguins diverged from the lineage leading to their closest living relatives – such as albatross and petrels – during the Late Cretaceous period, and then many different species sprang up after the dinosaurs were wiped out. It’s not impossible that penguins lost the ability to fly and gained the ability to swim after the extinction event of 66 million years ago, implying the birds underwent huge changes in a very short time. If we ever find a penguin fossil from the Cretaceous period, we’ll know for sure.”

What Does the Ancient Penguin Fossil Mean for Paleontology?

More research and new perspectives on the evolutionary changes occurring in the post-dinosaur era. Flinders University PhD candidate Jacob Blokland, who studied the fossils, admitted science has a lot on its plate. Moreover, he said that penguins sort of ruled the Earth after dinosaurs disappeared.

These birds lived in a time right after the dinosaurs and many other life forms went extinct, in relatively empty oceans. Penguins in these seas would have had very few competitors and that likely allowed them to be so successful back then. I don’t know if penguins were the ‘apex predators’ but they were definitely some of the top predators back in this time that we know about.

Given the fact that Kupoupou lived around the same time (and not very far away) from its monstrous cousin Crossvallia waiparensis, researchers think that it’s more to them than meets the eye. The fossils may link the origins of all penguins to the eastern region of New Zealand.

How they overlapped and coexisted with the giant penguins and how penguins made it to Antarctica are still questions paleontology is eager to answer.