Voyager 2 Has Left the Build… Our Solar System, And Is Never Coming Back

On November 5, 2018, Voyager 2 became the second human-made object to cross the barrier from our solar system into interstellar space – following its twin, Voyager 1. But will it ever come back?

This event was followed by an influx of data from its five operating scientific instruments, and on November 1, 2019, nearly one year following the crossing, this data was finally published. Soon after, a second study shone further light on what exists beyond our solar system, hinting at an infinitesimal possibility that Voyager 2 might one day come back.

The edge of our solar system is marked by the end of the heliosphere: the protective bubble of magnetic fields created by our sun. When Voyager 1 left the heliosphere in 2012, it showed that this bubble protects Earth from 70% of the cosmic radiation that exists beyond it. There’s also a difference in make-up between the inside of the heliosphere and interstellar space.

We generally think of space as being cold and empty, but in reality, it’s full of plasma: dense gas composed of atoms that are missing some electrons. Inside the heliosphere, this plasma is hot and sparse; outside, however, its colder and denser. It’s also sprinkled with cosmic rays: particles accelerated from distant exploding stars.

When Voyager 1 left the heliosphere, it saw a plasma density that was slightly higher than computer models predicted. It was an indication that the plasma at the border of our solar system might be compressed. Data collected by Voyager 2 supports this theory: a slight increase in temperature observed in crossing also indicates compression.

Voyager 2 also saw a slight increase in density just before exiting the heliosphere, creating the illusion that the plasma is being compressed around the inside edge of the bubble formed by the heliosphere. The cause of this compression, however, and its possible implications, is unknown. 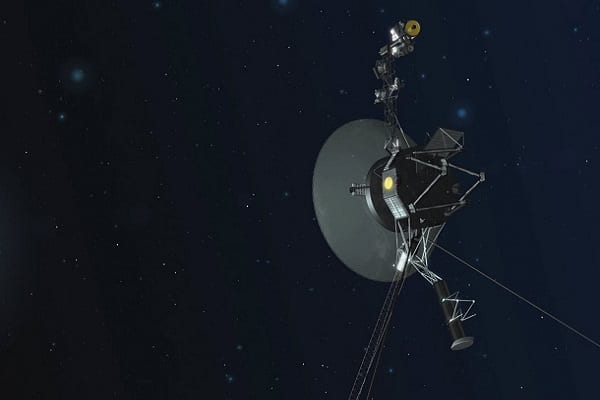 Further data collected during the crossing confirms observations made by Voyager 1. The magnetic field outside the heliosphere, for example, was proved to be parallel to that within it: a conclusion that Voyager 1’s data seemed to suggest but was questioned by scientists due to the limited sample size.

Voyager 2 also noted the same dramatic increase in an encounter with the energetic particles of cosmic rays that Voyager 1 had, confirming the probe’s entrance into interstellar space.

Unlike Voyager 1, however, Voyager 2 observed something new and surprising: a trickle of particles leaking from the boundary of the heliosphere. The two probes crossed the frontier at similar distances from the sun, but at very different times and locations. The matching distances gives the heliosphere a shape that’s at least partly symmetric, but that’s where the similarities end.

The region where Voyager 2 crossed – the flank of the heliosphere, as described by the solar system’s direction of intergalactic travel – is more porous, allowing for the slow leak noted by the probe. 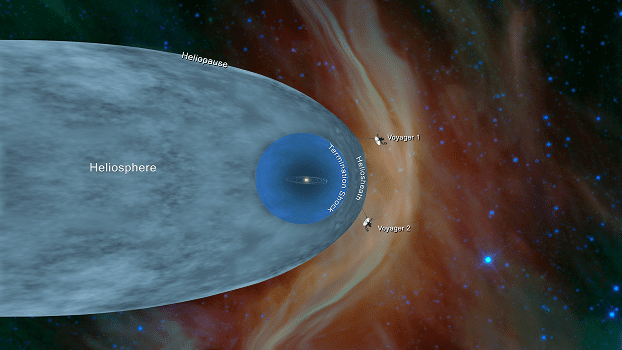 Will Voyager 2 Ever Come Back?

While the probe will keep collecting and transmitting data until its instruments fail, none of us will ever see it return to Earth. According to a new study, however, if it keeps sailing on and on, it might eventually return to the point of its launch. This study looked at the Cosmic Microwave Background (CMB): a hum of low-energy waves left over from the big bang.

After finding a higher amount of gravitational bending of CMB radiation than current physics can explain, the team concluded that the universe might be closed. It means the universe is curved like an inflated balloon: if you keep moving in the same direction for eons upon eons, you’d eventually end up right back where you started.

This Nature Astronomy study doesn’t confirm the closed universe model: among other reasons for doubt, the standard deviation (scientific error) of the data is well below the standard used in physics for confirming an idea. However, it does suggest that there’s a possibility, however small, that one day, Voyager 2 might reenter the heliosphere, and return home.

Nature Astronomy. Planck evidence for a closed Universe and a possible crisis for cosmology. [https://www.nature.com/articles/s41550-019-0906-9]