Interested in stargazing, but not knowing which types of telescopes work best for your hobby? Let’s find out today! Enjoy a bit of telescope history and a quick review on how light works!

In the early 1600s, two Dutch children explored a lens shop. Curiosity, a natural product of childhood, led them to look through the lenses Hans Lippershey had made. They peered through the glass, noticing how it could warp one’s view. Like young scientists, the children experimented with placing two lenses together. The result was you could see images brighter and larger.

Noticing the children playing in his shop and taking the chance to mimic them, Lippershey peered through the glass lenses at the local church’s weather vain. Interested in how it appeared closer, the Dutch eyeglass maker invented the kijker or “looker” in Dutch. This 1608 invention is known today as the refracting telescope.

Sitting in a physics class, an in-depth understanding of a telescope would be given during an optics lecture. The chapters in the book would provide images of eyeballs, cameras, microscope, and telescopes—all behaving based on the principles of sight and behaviors of light. A fancier way of explaining that is the properties of transmission and deflection of radiation.

That’s what light is, thinking back to 6th-grade science class. Electromagnetic radiation can be seen from the glow of the computer screen, known as visible light. That’s just a small portion of the spectrum, however. This spectrum covers all types of radiation, ranging from AM radios to gamma radiation.

Similar to the ocean, electromagnetic radiation moves in oscillating waves. The waves are measured anywhere from meters (AM radio waves) to picometers (ultraviolet). The wavelengths give different types of radiation altered properties. X-rays, for example, can create a photo of our dense bones because our skeletons absorb the radiation. Our organs and other soft tissues allow the beams to pass through them. Visible light wavelengths appear as different colors, from longest wavelength to shortest: red, orange, yellow, green, blue, indigo, and violet.

A Quick Review of Light Behavior

Waves across the spectrum behave differently when encountering objects. What defines the behavior is both the wavelength of the electromagnetic wave and the composition of the object.

Reflection is when light hits a smooth surface and bounces off, such as a mirror that reflects almost all visible light.

Diffraction is bending and spreading waves around an obstacle, like when light hits through the clouds after a rainy afternoon and separates into different wavelengths (colors) to form a rainbow.

Scatter occurs when light bounces off an object in a variety of directions. The sky appears blue because of the shorter wavelengths being scattered by oxygen and nitrogen atoms in our atmosphere.

Refraction bends light as it passes through a different transparent object. Light travels slower through water, and even slower through solids. Light waves will change directions as it is slowed to varying rates through a medium. When a straw is in a glass, the straw appears bent even though, in reality, it is

All of this—light, wavelengths, behaviors—connects back to the refracting kijker Lippershey invented. When the children peered through multiple lenses, they were refracting the light in such a way to bend the light to focus objects further, seeing clearer and closer than the naked eye could.

How Eyes and Telescopes Work 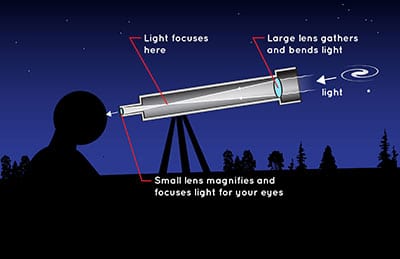 Let’s start with a slightly easier one: the refracting telescope. Light first enters through the objective lens or the larger, thick lens that gathers the light and bends it into focus. Thick lenses are more powerful, seen through prescription glasses from someone with poor eyesight. Unlike a small pair of eyeglasses, powerful telescope lenses can get very heavy and difficult to make perfectly. Any flaws would be like peering through a dirty window. Next the light enters the small eyepiece, which magnifies and focuses and focuses light for your eyes. 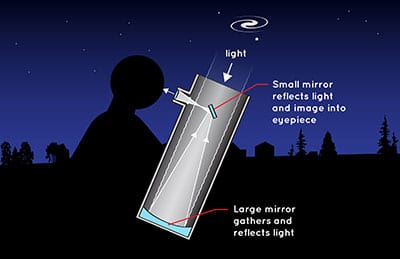 From there, the light directly enters into the eye through the cornea, the transparent outer covering of the eye that acts like a lens. The cornea refracts the light rays, which allows the rays to focus on the back of eye, on the retina. This principle can be extended to binoculars, microscopes, and cameras.

Reflector Telescopes – How Are they Different?

With reflecting telescopes, we replace the refracting with reflecting, and the lenses with curved mirrors. The primary mirror gathers the light and reflects it into a smaller mirror to reflect the image into the eyepiece.

Other Types of Telescopes

Optical telescopes, as described above, are two of the most common for amateur astronomers. In 1609, Galileo Galilei constructed a refracting telescope after hearing about the invention, making some of his most famous discoveries like Jupiter’s moons and sunspots. Sir Isaac Newton produced the first reflecting telescope in 1668, now known as Newtonian Telescopes, although scientists since Galileo’s time have been experimenting with the concept.

Professional astronomers use a range of telescopes to look at all kinds of to look across the electromagnetic spectrum: infrared telescopes, radio telescope, ultraviolet telescopes, x-ray telescopes, etc. 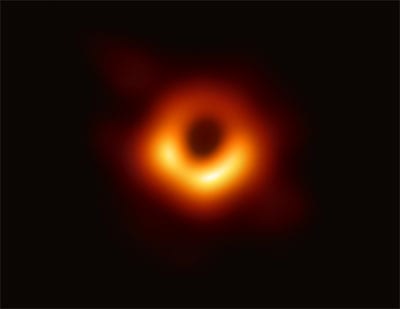 One of the most recent astronomical discoveries is a photo of the M87 black hole. What was previously thought to be impossible, a team of scientists captured an image of a black hole’s silhouette with the Event Horizon Telescope. It may be a bit of a misnomer, just saying “telescope,” since the collaborative effort actually took eight radio telescopes to capture the light from 55 million light-years away.

Telescopes help us reach galaxies beyond our own, whether it’s from our backyard or the observatory. There’s so much more to discover in the universe we live in and explore!

So what did we learn?

Want to learn more about types of telescopes and how they work? Check out our guides and telescope reviews, together with our latest news on space exploration and discoveries!