NASA’s Sun-exploring spacecraft – the Parker Solar Probe – returned unprecedented close views of our star and some data that baffled scientists to the point of “wow”.

Launched in 2018, the Parker Solar Probe is probably the most ambitious project of NASA. Getting in the vicinity of the Sun to understand it better is both a pride and a challenge. However, the probe came within 15 million miles of the sun successfully. It then sent back scientific data regarding the never-before-explored area of the Sun’s atmosphere, the corona.

The shock factor of the data published in the journal Nature involves the solar wind and its strange relationship with the star’s magnetic field. The Parker Solar Probe found bizarre S-shaped bends in the solar wind. Scientists observed them before but at greater distances from the Sun. It is the first time, however, when we observe these phenomena so strong in the vicinity of our star.

The probe’s data reveals unprecedented information about the Sun’s material’s and particles’ behavior when they speed away from the Sun. The probe also confirmed the existence of a dust-free zone close to the sun. Inferred by American astronomer Henry Russell about 90 years ago, the dust-free zone is now a reality. The environment around the Sun is dust-free as the star’s heat evaporates dust or it irradiates into oblivion.

These are not the only discoveries checked by the Parker Solar Probe. NASA offered a summary of the findings in a video.

The Parker Solar Probe is A Game Changer

Parker will get increasingly closer to the Sun in the next six years. The mission is for it to complete 24 orbits of our star. So far, it has completed only three. The purpose is to reach and explore the Sun’s corona (upper atmosphere) and shine new light on the phenomena occurring in the Sun’s immediate environment.

Scientists are now trying to solve and put together the puzzle pieces delivered by Parker. The relationship between the solar winds, the S-shaped bends, and the Sun’s magnetic field will keep physicists busy for quite some time.

Since we began stargazing, humankind wanted to understand the mysteries of our star. Just as the scientists involved in the project say, this is just a scratch to the surface. Nevertheless, it is also the dawn of a new era in physics and space exploration.

According to Thomas Zurbuchen, associate administrator for science at NASA Headquarters in Washington,

“This first data from Parker reveals our star, the Sun, in new and surprising ways. Observing the Sun up close rather than from a much greater distance is giving us an unprecedented view into important solar phenomena and how they affect us on Earth, and gives us new insights relevant to the understanding of active stars across galaxies. It’s just the beginning of an incredibly exciting time for heliophysics with Parker at the vanguard of new discoveries.“ 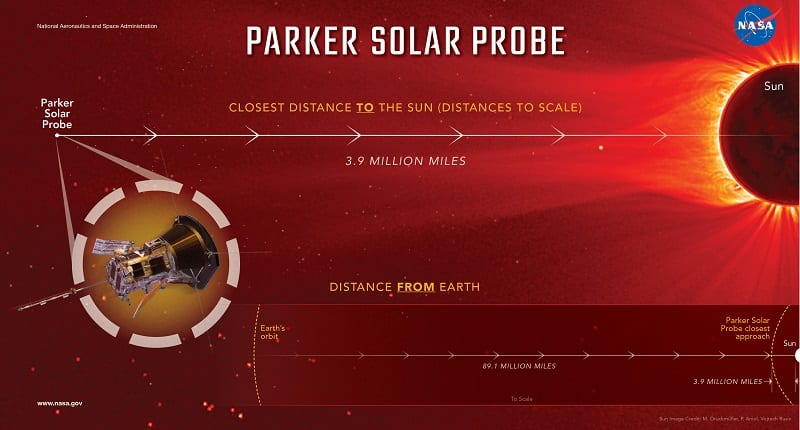 Where No Probe Has Gone Before

The Parker Solar Probe will continue its mission, getting closer and closer to the sun. As the star will soon enter a more active phase, scientists are expecting even more exciting data from the probe.

As the probe sent data back to Earth, the mission’s leaders shared them with solar astrophysicist Eugene Parker, professor emeritus at the University of Chicago. If you suspect that NASA named its solar probe after Eugene Parker, you would not be wrong. It is the first time in history when NASA names a spacecraft after a living person.

After attending the probe’s launch at Cape Canaveral last year, Professor Parker kept in touch with the mission. Now, upon seeing the first results sent back by the probe, he expressed his excitement. “Wow,” he said, mirroring perhaps the WOW Signal.