Newly Discovered Worm Denies Evolution as We Know It 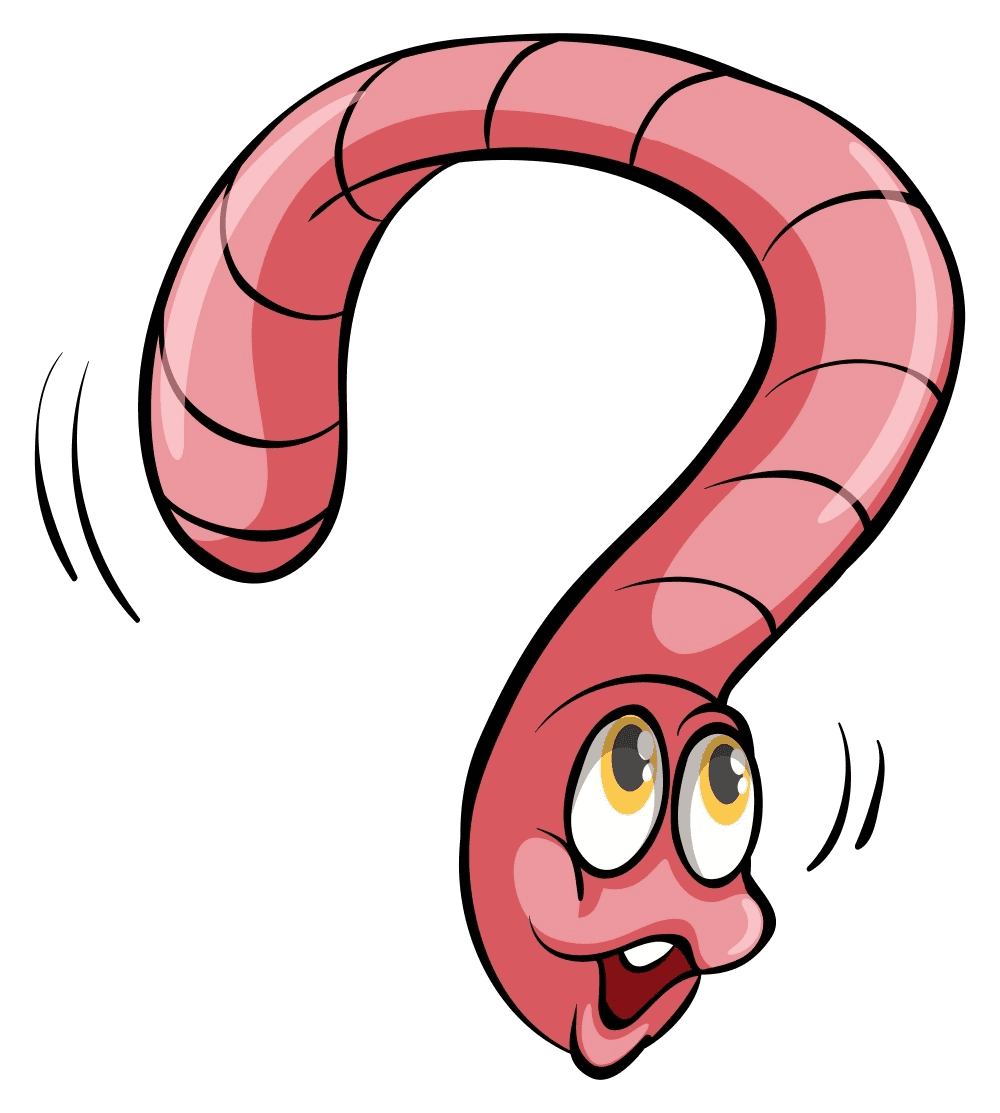 A single worm seems insignificant in the grand scheme of life. Nevertheless, the newly discovered worm in China gives evolution a spin on its head.

Who would have thought that such solitary creature that died over 550 million years ago would become the hottest recent topic of the scientific world? Well, this ancient fossil holds a few secrets up its non-existent sleeve and gives science a run for its money when it comes to evolution.

A new discovery sheds light on the timeline of life, specifically the Cambrian Explosion, a period associated with life beginning to flourish fully.

The fossil records show that our world experienced a sudden burst of a wide range of life forms in the seas – an event we know as the Cambrian Explosion. The worm that scientists named Yilingia spiciformis is, however, a gamechanger.

This segmented and trilobate bilaterian, which formed sometime between 551 million and 539 million years ago, in the Ediacaran period, says a different story about how life appeared and evolved. It challenges the present theories regarding the Cambrian Explosion as the harbinger of life on Earth.

Fossils dating back further than the Cambrian are unusual. Animals alive during this time were thought to be only soft-bodied (such as sponges and jellyfish). The lack of evidence from this period fuels misinterpretations of evolutionary milestones.

Until now, researchers found only the tracks of these worms, causing confusion in identifying what created the trails.

The recent samples consisted of a trail but also of a fossilized body coming along with it. The worm, now named Yilingia spiciformis, represents the breakthrough of Zhe Chen (State Key Laboratory of Paleobiology and Stratigraphy, Nanjing Institute of Geology) and his team. The discovery originates in the Dengying formation of Southern China.

The Dengying Formation is a fossiliferous layer of the Earth that dates back to the Ediacaran period (the time period immediately before the Cambrian). The bizarre, worm-like creature died as it was crawling across the murky seafloor. Its passing went unnoticed and undisturbed and it fossilized.

Until now, scientists thought that such more advanced life forms were only specific to the Cambrian period. The new specimen and its trail show, nevertheless, that it death-marched the planet at least 50 million years earlier than first thought. As people involved in the project said,

and is about to change everything we know about the when and the how of animal evolution on our planet.

The worm had an elongated and segmented body of up to a quarter-inch to an inch wide and up to 4 inches long. It also featured complex anatomy, as it presents around 50 segments, two sides (left and right), a back and a belly, as well as a distinct front (head) and rear end (tail).

However, it’s unclear if Yilingia’s body also featured internal segments. Segmentation in worms was a major factor in refining and articulating movements from an evolutionary point of view. It is present in both annelid worms and arthropods. Nevertheless, it has never been proven if segmentation arose independently or from a common ancestor.

Scientists suspect that Yilingia had parapodia-like appendages similar to that of early annelids or arthropods. It’s not entirely clear if these lobe-like shapes in the fossil are truly appendages or a characteristic of the fossilization process.

If the impressions are appendages, it shows us that the worms were crawlers, not wrigglers. Again, in the grand scheme of things, it may not sound too important, but it proves the worm had improved movements, also pointing to the existence of a more advanced nervous system for its time.

The worms were bilaterally symmetrical (having a single line of symmetry). The presence of these worms in the fossil record at this time shows that bilateral symmetry would have arisen a considerable length of time before anyone suspected.

In the paper, Chen notes that

As one of the few Ediacaran animals demonstrated to have produced long and continuous trails, Yilingia provides insights into the identity of the animals that were responsible for Ediacaran trace fossils.

How Does the Worm Change the Way We Interpret Evolution?

What we know about the Ediacaran fossils is that they had weird anatomical features that differ completely from those we acknowledge in modern animals. For this reason, scientists had a hard time relating the Ediacaran organisms to the Cambrian ones. This struggle fostered the idea that the Cambrian Explosion was the first burst of life and occurrence of animals that are familiar to us.

In recent years, theories and opinions began to shift. Scientists started to recognize some Ediacaran organisms as animals despite their strange looks, suggesting that life on Earth began way before the Cambrian Explosion. 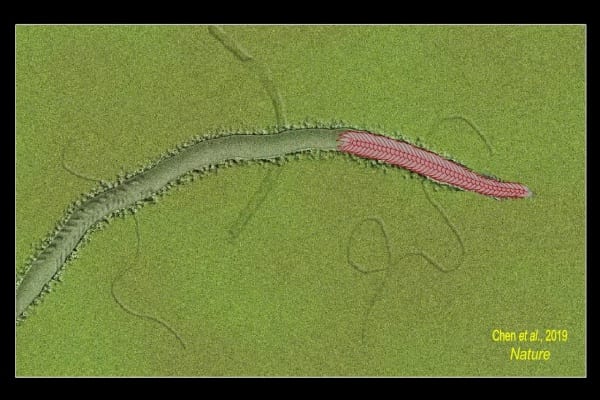 Yilingia spiciformis seems to be the “missing link” between the Ediacaran and Cambrian, fitting perfectly into the evolutionary puzzle and pushing such innovative ideas further. With its segmented and symmetrical body, Yilingia shows similar traits with the Cambrian animals.

The discovered trail also shows the worm-like creature could crawl on the bottom of the sea like its Cambrian peers and modern animals as well.

In conclusion, Yilingia looked and moved a lot like Cambrian animals, despite the fact that it lived millions of years before what science usually considers the starting point of the Cambrian Explosion.

So far, the suspicion is that the worm somehow relates to either annelid worms or arthropods and could be a possible link between the two groups. This hypothesis stems from morphological observations. Of course, extended analysis is necessary to give any kind of definitive answer.

The suspected relation to annelids makes this worm even more interesting. Until now, the oldest known annelid fossil dates around 520 million years ago (Morris & Peel).

If Yilingia truly is annelid, its existence puts the appearance of not just annelids, but of a diverse population of annelids before 550 million years ago.

What’s Next for Evolutionary Research?

Depending on what further investigation will show, Yilingia may be either a relative of insects and crustaceans or, if its anatomical particularities are a result of fossilization, it may be a primitive worm.

According to Shuhai Xiao, a co-author of the study, we may also have to factor in a third possibility: Yilingia may be an ancestor for both lineages.

This theory does not sit well with Doug Erwin, a paleo-biologist from the Smithsonian National Museum of Natural History in Washington, DC, who has even more out-of-the-box ideas when it comes to the origins and ancestry of the Yilingia. He thinks that the worm could come from a totally different branch of the animals’ evolutionary tree, one which has since gone extinct.

This discovery has shown us there were more fossils preserved from ancient times than we had ever imagined.

These seemingly insignificant worms have blown apart everything we have thought we knew about the Cambrian Explosion. So now, instead of wondering what the future holds, we wonder what other mysteries has the past in store for us!