Monkey Hear, Monkey Do: Marmosets’ Dialect Can Teach Us a Few Things about Social Behaviour

If you plan on being the next Dr. Doolittle, it might be trickier than you think. Even if you can speak to animals, you might not be able to understand their accents. But we can all learn something from them.

To us regular humans, a marmoset monkey sounds like an average marmoset, but to other marmosets and those more magically inclined, they have distinct accents, and they can even modify them. Until now it was unclear if this has a connection to genetics, environmental conditions or a learned skill. Researchers at the University of Zurich have now concluded that this is a socially learned skill.

Marmosets’ Dialect Development: How Interesting is That?

Marmosets are amiable and highly vocal creatures that live in small groups of closely related individuals. The group usually has a co-dominant breeding pair and around 6 or 7 subordinates who assist in rearing the younger members.

They depend on each other for survival in dense forest canopies where it can be easy to get lost or be ambushed by a predator, so clear communication is crucial. Marmosets use a range of facial expressions, body language and, most importantly vocalizations to effectively communicate with one another.

They also have a vast repertoire of calls for a wide range of messages and signals to help them to talk to each other or keep in touch over long distances.

Vocal communication is taught at a very young age, and the vocalizations of their caregivers are an essential part of learning. Infants will babble the same way as a human baby does when learning to speak. The call of a young monkey will naturally change as it gets older, most commonly becoming more in-depth as they reach adulthood.

Regional dialects are not exclusive to marmosets, as many other primates have them too, but they don’t change after they have reached adulthood. These primates also leave their families to settle down in new groups before they reach full maturity.

Marmosets, on the other hand, will find their new groups as adults and can change groups multiple times throughout their lives. It could explain why they retain the ability to change their accents longer than other primates. 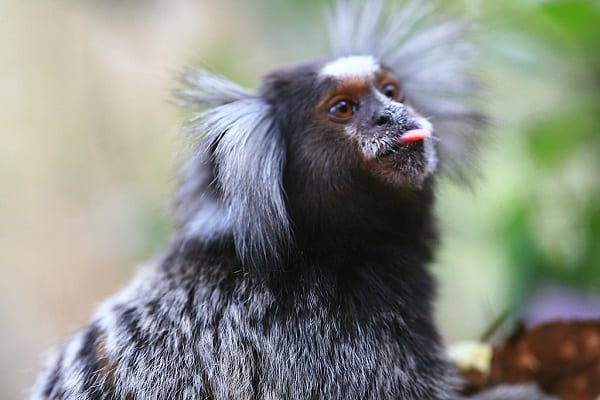 When marmosets experience a change in social situations, such as moving to a new group or the establishment of a new breeding pair, the monkey will change these vocalizations to match their new group. Experts think that this is a way for individuals to signal interest and fit in with their new group.

The study showed that they would change their social calls but not their food calls to make sure their original group members would still recognize them and their request for food. It has also shown that they can learn these vocal cues with no physical interaction with the group, meaning that the skill is passively learned through listening.

We know this as crowd social learning, and it is a pretty impressive feat.

The only mammals that have shown the ability to learn dialects through exposure alone are humans and bats.

Now you can add this discovery to your list of fun animal facts, but don’t call it a day yet, as we still have a few things to learn about marmosets’ dialects!

Marmosets are one of the most social primates that depend on their groups for help. The study suggests that we still have a lot to learn about marmosets’ dialects, social behavior, learning capacity, and yes, evolution. While we do not share many traits with these primates as we do with great apes, we do share at least one important similarity: we raise our offspring with the help of the group, which, in turn, can explain “language skills” learning.

Having a clear communication system can mean the difference between life and death in both marmosets and humans, and that’s just the tip of the iceberg.

So What Did We Learn about Marmosets’ Dialect and “Language”?

According to Yvonne Zürcher, first author of the study,

We could clearly show that the dialects of common marmosets are learned socially. If their dialects were genetically determined, moving to a new place wouldn’t cause any change in calls. The changes can’t be explained by differences in the environment either.

Judith Burkart, senior author of the study, also emphasizes that

meaning that they learn what vocal register to use from the other monkeys around them. It is a very advanced ability that suggests a long history of vocal behavior.

Just like the authors suggest, these findings and other similar ones prove that marmosets represent crucial model systems we can further research to understand the origins and evolution of language.