Hemorrhagic shock is the primary cause of trauma-related deaths (80%) after the first hour of admission to the hospital. A research team from MIT proposes a “buying time” solution. How about a magnetic fluid injection to the bloodstream and magnets to reduce bleeding?

The Magnetic Fluid That Stops Bleeding: Where Medicine Meets Physics

A team of scientists from MIT is now testing a magnetically-actuated fluidic valve that could save trauma patients’ lives. Or at least buy them enough time until they reach the hospital to receive proper care.

Yonatan Tekleab and his colleagues presented the working principles of the valve at the American Physical Society’s Division of Fluid Dynamics 72nd Annual Meeting two days ago. The team proposes patients receive an injection with a magnetorheological suspension. Then, doctors would place small magnets externally to influence the magnetic fluid and significantly reduce bleeding. 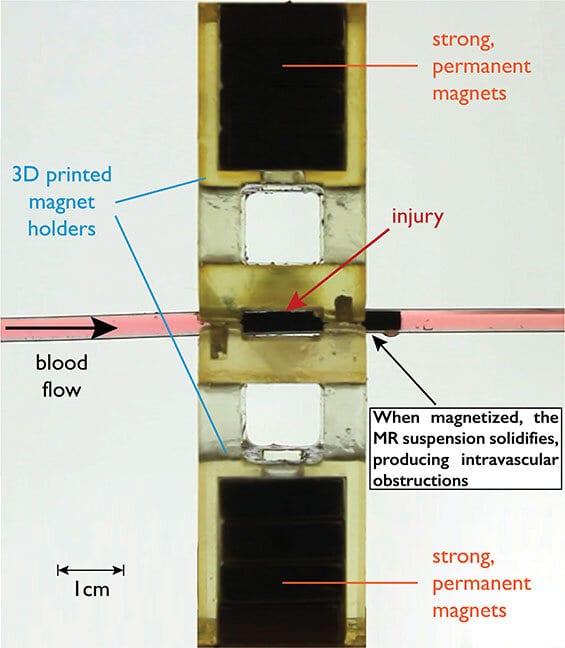 How Does the Magnetic Fluid Work?

The physics behind this principles are simple to understand:

Once the bleeding stops, its effect on the blood pressure should be instant.As a result, the body’s vascular system maintains the proper blood flow to the critical internal organs.

Should doctors use this magnetic fluid, they should inject the suspension upstream of the injury. The bloodstream carries it then to the site of the injury. As a result, the magnetic field slows the blood loss, stabilizes blood pressure, and has high chances of increasing survival time by up to 30 minutes. It doesn’t seem much for us, but half an hour for a traumatic patient can make the difference between life and death.

Of course, scientists admit that there are traumatic injuries for which this magnetization technique won’t work. Nevertheless, the system may prove useful to a significant number of trauma cases.

“The MR fluid acts as a localized hemostat and is designed to halt bleeding, so it would not be helpful for non-hemorrhagic injuries, such as traumatic brain injury. Severe injuries to multiple body parts may also present a challenge if the suspension cannot be injected locally, because directing the fluid to multiple sites may be difficult. If the patient is still in a state in which he or she can be resuscitated, this fluid may help slow bleeding to sustain life until they can be transported to a trauma care facility.”

Could Magnets and Magnetic Fluid Be the Key to Saving Certain Trauma Patients?

According to the MIT research team, the technology would be easy to implement by trauma field specialists everywhere. Field surgeons and emergency personnel would wear 3-D printed holders to keep the magnets on them. In case of an emergency, they would use these magnetic fluid activators at the scene of a trauma.

Once again, science takes a step further, giving us hope that we could save even more lives than we already do.