The Lost Vikram Moon Lander and the Search Party

India’s Chandrayaan-2 mission to the Moon launched in July this year. Had the Vikram Moon Lander reached the lunar surface smoothly, India would have become one of the few and pride countries to successfully place a lander up there. However, as news reported back then, the Indian space agency lost contact with the lander. Instead of following its planned trajectory, Vikram veered and fell out of radio contact.

A day later, India announced it found the crash site and the wreckage, but it did not come forward with any footage taken by the lander’s accompanying orbiter, which is still in operation.

NASA directed its Lunar Reconnaissance Orbiter spacecraft to monitor the Indian mission’s intended landing site, but came out empty. The initial analysis did not show significant surface signs, but the LRO took as many images as possible and released them on September 27. Many astro-sleuths downloaded them and began searching for the Vikram Moon Lander’s crash site. 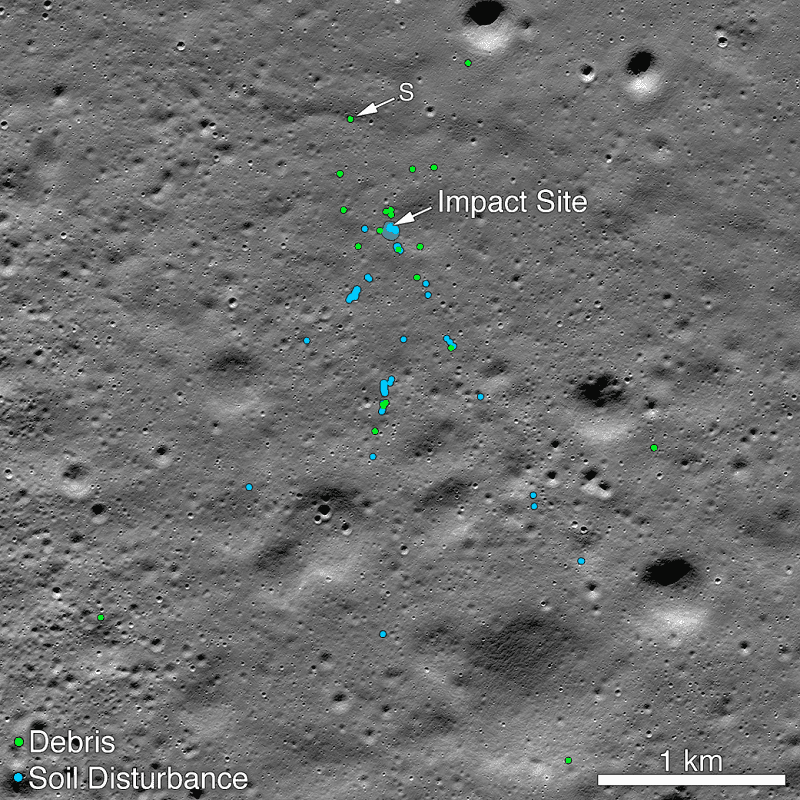 Shanmuga Subramanian, an IT professional in Chennai, India, analyzed NASA’s released images and contacted the agency once he understood where the lander’s crash site really was.

Comparing the lunar images taken before Vikram’s landing attempt and those taken last month, NASA scientists could identify the crash site at a distance of about 2,500 feet from the planned touchdown site. They also discovered a spray of the lander’s debris. Of course, NASA gave credit to Shan.

According to the official NASA press release,

“Shanmuga Subramanian contacted the LRO project with a positive identification of debris. After receiving this tip, the LROC team confirmed the identification by comparing before and after images. When the images for the first mosaic were acquired the impact point was poorly illuminated and thus not easily identifiable. Two subsequent image sequences were acquired on Oct. 14 and 15, and Nov. 11. The LROC team scoured the surrounding area in these new mosaics and found the impact site (70.8810°S, 22.7840°E, 834 m elevation) and associated debris field. The November mosaic had the best pixel scale (0.7 meter) and lighting conditions (72° incidence angle).“

The Moon is a Cruel Mistress

India’s Vikram Moon Lander is not the only unsuccessful lunar landing mission of late. Earlier this year, Israel’s Beresheet spacecraft crashed as well in an attempt to soft land on the Moon’s surface. This doesn’t stop NASA or other global space agencies to go out there. As we already reported, NASA is currently developing the ARTEMIS program. In 2024, the agency aims to land a handful of astronauts (including the first woman) on the lunar surface and establish a sustainable base, a constant human presence on the satellite.