Ice Fossils (not 42) Is the Answer to Life, the Universe, and Everything

An ancient space rock crashed into Earth at some point in time and we discovered it nearly 30 years ago. Now, scientists found ice fossils in the meteorite shard, structures that may be able to shine light on the origin of water on Earth and the birth of our solar system.

According to a paper published last week in the journal Science Advances, researchers from Japan, China, and the UK found evidence of ice fossils on the surface of a meteorite shard named Acfer 094.

Scientists have been studying this ancient rock from space for about 30 years. The space rock was discovered in the Algerian mountains back in the nineties. Now, researchers revealed that the porous pokes and gaps on the meteorite’s surface represent fossilized holes that held ice crystals.

The primitive meteorite dates back to approximately 4.6 billion years ago – about the age of our solar system. Scientists believe it can provide insight on how planets and other celestial bodies were born and took shape at the beginning.

Ancient Mineral and Water Interactions: The Key to Planetary Formation

Using synchrotron radiation-based X-ray computed nanotomography technology, the scientists discovered that the “fluffy” surface of the meteorite shard were extremely tiny. We are talking about 10 microns pores, which held ancient ice crystals.

The 82-grams piece of meteorite may be the key to understanding better the origin and evolution of our solar system. Also, besides the former tiny homes of ice fossils, the research team also found traces of minerals. However, there were more minerals than they have expected, leading scientists to search for their additional sources. 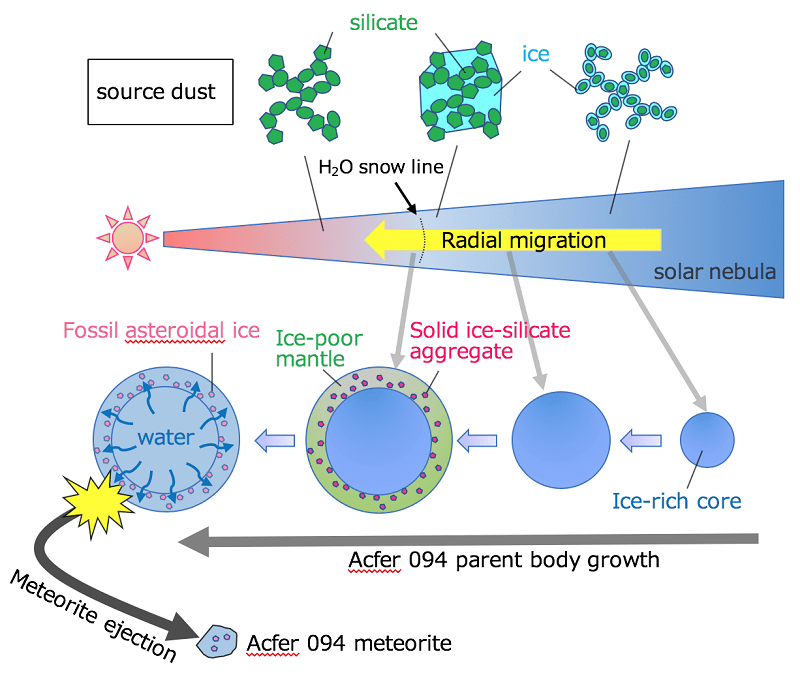 What Do the Ice Fossils Tell Us about the Origin of the Solar System?

The team of experts found that the original body of the meteorite shard was a planetesimal – the seed of a planet. This seed formed outside our Solar System from what scientists call “fluffy dust.” As the ancient celestial body grew, it accumulated an ice-rich core and an ice-poor mantle. Then, it approached and crossed the snow line.

Upon the crossing, the ice sublimated, especially inside the core. The phenomenon would have altered the celestial body’s structure, leaving behind the tiny pores and the mineral traces that suggest water interactions.

After this, the asteroid broke apart and spread throughout the universe, with us being lucky enough to find the Acfer 094 fragment here in Algeria.

So what does this all mean? According to the research team, we may just have found the building block from which all planets, including Earth, came from. The little balls of space dust and ice gathered together to form celestial bodies. Some remained small, like asteroids, other grew and grew to become planets’ cores.

To quote Dr Epifanio Vaccaro, one of the researchers from the Department of Earth Sciences in the Natural History Museum of London

“I’ve been looking at the matrix of primitive meteorites, the material that holds the structure together. The meteorite in question dates to roughly 4.6 billion years ago, when the Sun was born and our solar system formed. The matrix of these meteorites is therefore thought to be the starting material from which all the planets formed. […] Based on this finding of asteroidial ice, we made a model that tells us how the asteroid grew and how the planets formed. We think that fluffy ice and dust particles came together into bigger bodies beyond the snow line, and then migrated inwards. As they did so, the ice started melting leaving the fossils in its place.”

Ice Fossils: The Answer to Life, the Universe, and Everything

Since now we have the technology to study the very matrix of meteorites we discovered on Earth so far, we can understand better how planets – including our blue marble – were formed. And by understanding where these ancient ice fossils come from, we can also understand where we are coming from.