Thanks to a piece of ancient chewing gum, scientists were able to extract and analyze the entire genome of a neolithic human. Meet Lola, a young woman who lived 5,700 year ago and was a beauty.

According to a statement from the University of Copenhagen, this is the first time we are able to extract an entire human genome from something else other than ancient human bones.

During excavations on Lolland a Danish island in the Baltic Sea, archeologists discovered a piece of ancient chewing gum with teeth marks on it. The Stone Age archaeological site, Syltholm, preserved a piece of birch pitch perfectly sealed in mud. The Syltholm archeological site is unique: almost everything there is preserved in mud, so finding pristine organic remains is “phenomenal.”

With the piece of ancient chewing gum in their hands, scientists set out to extract the DNA embedded in the birch pitch. They found the entire genome of a young woman (named Lola), traces of plant and animal DNA, and even DNA from oral microbes. With these data available, they could reconstruct not only Lola’s portrait, but her story entirely. 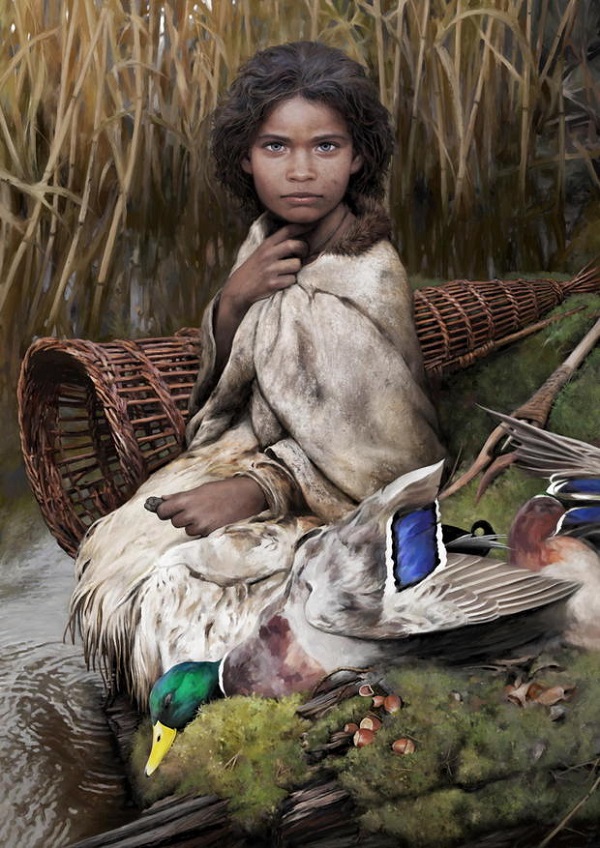 The Ancient Chewing Gum: A Window into Lola’s Past

Here are the most important published findings about Lola as drawn after the rigorous DNA analysis of everything they found in the ancient chewing gum:

Why Did Our Ancestors Use this Ancient Chewing Material?

According to the press release and published study, the birch pitch was a form of ancient glue, obtained by heating up birch bark. Ancient groups in the Paleolithic era used it as glue for making stone tools. However, scientists have previously found chewed birch pitch, suggesting that our ancestors chewed the material to warm it up and make it more flexible.

Nevertheless, Lola may have known about the vague antiseptic properties of the birch pitch and might have used it to relieve a toothache. Nobody excludes the idea that our ancestors could have also used it for teeth brushing or just for fun. In any case, the DNA data in the ancient chewing gum is a treasure trove of information on ancient bacteria and viruses. According to lead researcher Dr. Hannes Schroeder,

“The preservation is incredibly good, and we managed to extract many different bacterial species that are characteristic of an oral microbiome. Our ancestors lived in a different environment and had a different lifestyle and diet, and it is therefore interesting to find out how this is reflected in their microbiome. It can help us understand how pathogens have evolved and spread over time, and what makes them particularly virulent in a given environment. At the same time, it may help predict how a pathogen will behave in the future, and how it might be contained or eradicated.“

Studying ancient chewing gum is relatively new as a practice, but it could reveal unprecedented information about our past. Now that we met Lola, we cannot wait to learn the secrets of other such samples, if found.