A new study published in the journal Nature Communications says all three of the above may have contributed to the mass extinction that wiped 3/4 of Earth’s plant and animal species. A a team from the University of Michigan found that the Deccan Traps volcanic eruptions may have played their part in the extinction event.

What are the Deccan Traps and Their Ancient Volcanic Activity?

The massive volcanic eruptions of the Deccan Traps in western India is a topic that has been baffling scientists for quite some time now, as they struggled to understand their role in the mass extinction event. The Deccan Traps volcanic eruptions began before the asteroid hit the Earth. The interesting fact is that they lasted, on and off, for about a million years. Moreover, they lasted even after the impact event. 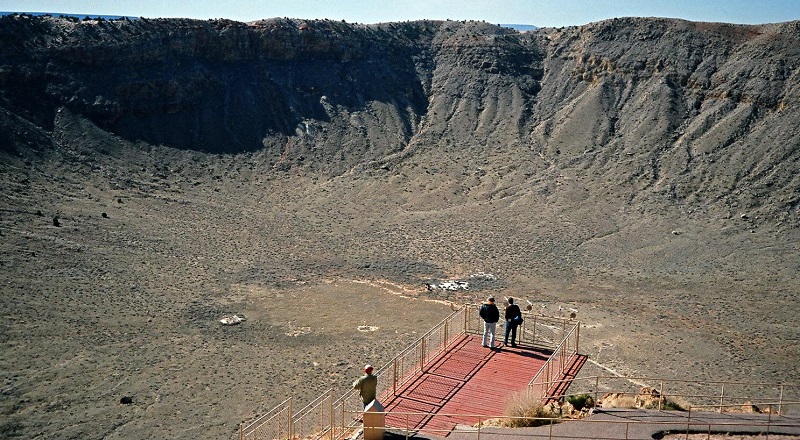 An Accumulation of Factors Leading to the Mass Extinction

It is still hard for scientists to wrap their heads around the massiveness of the Deccan Traps eruptions as well. They covered about 200,000 square miles with a layer of lava that was about a mile thick.

To this point, it is an understatement to say that Earth was already facing some stress before the asteroid impact.

Life on Earth: Caught Between a Rock and a Hard Place

If we were to create some sort of timeline or event sequence, things would have looked like this:

By studying mollusk shells from around the world, scientists found the first occurrence tying global warming and mercury increase from the same samples. There are more issues to this, however, than meets the eye. In our world, today, we know of mercury concentrations as high as they were 66 million years ago, when the dinosaurs disappeared. The present-day mercury pollution site in Virginia’s Shenandoah Valley carries fishing bans for humans.

According to Kyle Meyer, lead author of the new study,

“For the first time, we can provide insights into the distinct climatic and environmental impacts of Deccan Traps volcanism by analyzing a single material. It was incredibly surprising to see that the exact same samples where marine temperatures showed an abrupt warming signal also exhibited the highest mercury concentrations, and that these concentrations were of similar magnitude to a site of significant modern industrial mercury contamination.“

Did The Deccan Traps Eruptions Really Contributed to the Mass Extinction?

Imagine this, if you can: in western India, the Deccan Traps begin to erupt and keep erupting for almost a billion years. In the meantime, an asteroid hits the planet in what we now call Mexico, generating a catastrophe of epic proportions.

In between, plant and animal life struggles and fails to survive. The science team explained that the Deccan Traps volcanism was massive, intense, long-lasting, and global. In other words, all these factors led to what we now know as the dinosaurs’ extinction.

The modern site has a fishing ban for humans because of high mercury levels. So, imagine the environmental impact of having this level of mercury contamination globally for tens to hundreds of thousands of years.