CRISPR: The Future of Diagnosis Tools, not Only Designer Babies

Case Western Reserve University researchers managed to turn CRISPR into a universal biosensing point-of-care medical device that can detect HPV or Parvo viruses in less than an hour.

Since science started talking about CRISPR, the world split into two main factions. One heralds CRISPR as the very future of life, able to heal and even eradicate some crippling diseases. The other professes unprecedented ethical dilemmas and dangers regarding human gene editing.

Nevertheless, scientists from Case Western Reserve University found other uses and opportunities in the gene-editing tool. They want to turn CRISPR into a medical device & diagnosis tool able to detect viruses like human papillomavirus (HPV) or parvovirus (Parvo) in human blood – much like the store-bought blood-glucose sensor does.

How Can One Turn CRISPR Into a Medical Device?

Yifan Dai, a Ph.D. candidate in the chemistry department of Case Western Reserve University and the lead author of the paper Exploring the Trans‐Cleavage Activity of CRISPR‐Cas12a (cpf1) for the Development of a Universal Electrochemical Biosensor points out that it can serve as a virus-diagnosing tool. All it would need would be a droplet of blood to return the results.

Dai and his team managed to convert the CRISPR “recognition induced enzymatic signal” to an electrical signal. In turn, the electric signal can read the biomarkers for viruses like HPV or Parvo. The envisioned diagnosis technique got the name E-CRISPR (with E coming from “electrochemical”) and could offer a concrete result in less than an hour.

The scientists believe the E-CRISPR could become an affordable, fast, and reliable point-of-care device for identifying different nucleic acid viruses. Its leverage in comparison to the existing tests lies in its efficiency. Whereas classic medical tests for HPV or Parvovirus can take up to 5 days and are very expensive, the E-CRISPR technique could deliver accurate results in less than an hour.

How Would the E-CRISPR Proposed Tool Help People?

The Human Papilloma Virus (HPV) causes cervical cancer and correlates with the development of the other five types of cancer. While it is treatable if caught early, HPV goes undetected most of the times because most people do not show symptoms. According to statistics, about 79 million people worldwide are thought to have an active HPV infection at any given time.

E-CRISPR can save lives in the sense that early diagnosis can open the door to better treatment and higher chances of recovery. The importance of this diagnosis tool becomes even more clear when we think that the global HPV incidence (around 85%) occurs in the less developed areas, where it accounts for up to 12% of all female cancers.

Now, imagine a world where all these women would benefit from a fast, reliable, and cheap diagnosis tool that can literally save their lives! 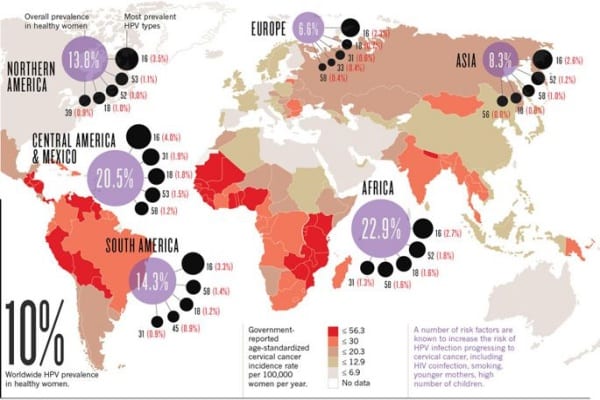 But How Does E-CRISPR Work, Exactly?

In recent years, CRISPR got a lot of attention in the medical community, especially because CRISPR-cas9, first used in 2016, made the headlines again recently. Scientists managed to find a new method of fine-editing DNA, a technique they called “prime editing.” This seems to be an easier and smoother method to rewrite genes safer and more precise. CRISPR-cas12 proved successful in cutting DNA (even the good one, which was problematic).

When it comes to E-CRISPR, the principle is similar. Dai explained:

The CRISPR technique works so that it cuts all of the non-specified single-strand DNA around it once the target is recognized, so we program to electrochemically probe this activity. No virus—no cutting, it’s that simple. And the opposite is true: If CRISPR starts to cut, we know the virus is present.

While CRISPR generates hot debate throughout scientific circles and poses almost Sci-Fi challenges to our modern world (designer babies, edited humans, immortality, and super-soldiers being just the tip of the iceberg), researchers are finding more and more uses to it. Turning it into a fast, non-invasive, and reliable diagnostic tool to discover HPV would indeed save millions of lives at insignificant costs. And if this is not progress and evolution, we don’t know what is.